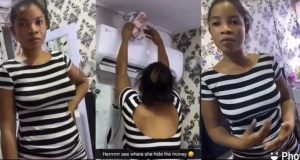 Video : SlayQueen Caught After Stealing Boyfriend’s Money And Hiding It In An Air Conditioner. A Slay Queen who have had a bad day has been nabbed in an attempt to rob her boyfriend.

In a viral video chanced upon by browngh.com, the lady decided to rob the house when her boyfriend wasn’t at home.

The guy who recorded the video returned back home only to realize that his MacBook is no where to be found.

Realizing that all is not well, the yet-to-be known guy checked his closet where he keeps his money and surprisingly, a whopping sum of ¢35,000 has flown.

Even though the guy refused to reveal how his girlfriend got tracked, it appears she was the prime suspect.

Questioning his girlfriend why she did that, the lady refused to speak, signifying that she intentionally stole the money.

Sensing the harm that will obviously come her way, she shamefully led her boyfriend to where she stole and kept the money.

Watch the video below and where the lady kept the money will define how a talented thief she is. Video : SlayQueen Caught After Stealing Boyfriend’s Money And Hiding It In An Air Conditioner.