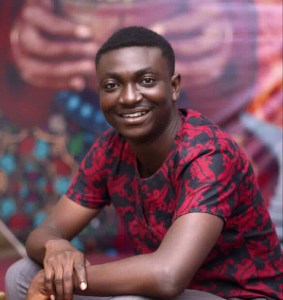 Screenshots : NDC Supporter Causes Nationwide Rage With Tribalism Post. Just when you think you have seen it all, here comes another. Whiles the nation is in panic of the western Togoland Saga and peacekeeping for the December polls, all we can ever expect is some positivity and nothing else.

But someone doesn’t see the benefits of sticking together as one people and one nation. A Facebook user by name Efo Selorm took matters to Mars with an outrageous politicized Tribalism driven post about A participant of the just ended National Science And Maths Quiz.

Efo Selorm who happens to be an Ewe native displayed nothing but pure hatred and ignorance against Asantes and further went ahead to politicize his ignorance proudly.

He took to Facebook to congratulate a student of Presbyterian Boys senior high school for his successful run in the national science and maths quiz and later turned a positive congratulatory post into a tribal slaughter.

Efo Selorm stated plainly that despite this students intelligence, he will stay unemployed even after graduation whiles the good for nothing students who cheered him up occupy big government seats and instruct him all because he’s an Ewe.

It’s hard to digest the thinking capacity of such an individual who can boldly come out publicly to put his low IQ on display. He probably got a couple people who will cheer him up.

Efo didn’t stop there. He went further to blame all of that on President Nana Addo and his NPP government. Pointing out that Akuffo Addo holds an agenda to sideline ewe natives from holding higher ranks in the country. It never got worse from here but terrible as he campaigned proudly for Ex president John Mahama indicating that he is the only one fit and bold enough to change that Ashanti brewed supremacy system.

Nothing much must be said from us. Take a peep at his post below. Screenshots : NDC Supporter Causes Nationwide Rage With Tribalism Post. 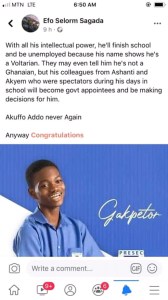