Dr Likee reveals how he started his skits with his Infinix phone. Ghana’s favourite comedian currently Ras Nene who is widely known as Dr Likee has recounted the days he started shooting his short films disclosing that he had to use his phone to shoot at certain times.

According to him, the support was not there at that point so he was left with no choice but to shoot about his creativity with a personal phone which had a camera app. Dr Likee speaking with Nana Ama MCbrown on the united showbiz narrated that the basic stage was never easy. He conceded the fact that at a point he nearly gave up because there was no fruition.

“I remember I went to a certain man to seek support about getting a camera which I had wanted to use for my skits. The man asked me how much I wanted and I told him.

When I told this man, he said how, how can you use this money on this. In fact, the man really discouraged me.

Dr Likee has become a household name with his short films virtually scattered across Ghana cracking ribs. Dr Likee reveals how he started his skits with his Infinix phone. 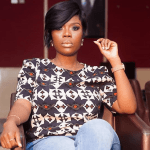