According to Kumchacha, a song is supposed to make sense but Wendy’s does the opposite.

To his best knowledge, any good song is supposed to be morally right, carries a good message, but when it comes to Wendy Shay, they are just depicting s3xual obscenities.

“Someone who sings and says a whole Nana Addo p3 hw3 and things, you have to be fast and get the promotional aspect of her songs, it does nothing meaningful than to promote prostitution.

“The truth is one, don’t open your mouth, she sings to encourage prostitution among this kind of generation”, he said. 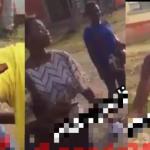