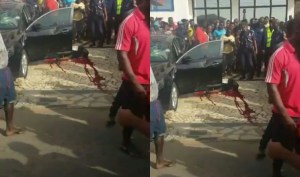 Video : Robber Shoots Himself In The Head After Shooting Innocent Victim . The weather is getting cold but the system is getting colder as the state of affairs beats the mind by a thousand light-years.

The latest development is as shocking as the contact with electricity. Scenes from the garden city of Ghana aren’t befitting of the good name the city have carved for itself nor is the reactions a and panic a memory to behold.

It has been reported that a ghastly incident involving two drivers had struck The Ayeduase suburb of kumasi and it’s one that leaves none happy. A driver who was confronted for wrongful parking lost his cool and pulled a gun and the instant flashes that followed was the loss of two lives which happened to be the conflicted themselves.

A Robber pulled a gun and shot an innocent victim who happened to be an Aboboyaa Driver In the the belly which resulted in his death per eyewitnesses.
Eye witnesses revealed that the Robber who was on a mission to rob someone was waiting for his target and hence parked wrongfully.

The Robber who was unable to withstand the guilt of his actions pulled the trigger and landed the bullet straight to his own head resulting in an instant death after he found out he was near police grip and there was no escaping the scene and his guilt. The scenes are painted red with blood as spectators troll here and there in shock.

One will wonder the extreme line humanity have crossed to be so witty of claiming lives with no remorse at all. The police have currently taken over with investigations and we are monitoring the case to bring out more further details.

Watch the video below ; Video : Man Shoots Himself In The Head After Shooting Aboboyaa Driver For Wrong Parking.

Video : Man Shoots Himself In The Head After Shooting Aboboyaa Driver For Wrong Parking
0 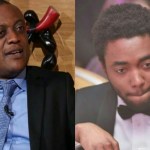 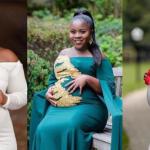