Video: Lesbians kidnap and beat up journalists after reporting their wedding. A number of journalists were manhandled by some Lesbians when they went to Kwahu Obomeng to report on the developing story about the arrest of some Lesbians who were apprehended after holding a wedding ceremony last weekend.

Some of the Journalists who were from media houses like Angel TV in Accra and Adom TV were kidnapped by the lesbians’ group when they got to the particular place the wedding was held.

Their recorders and phones were ceased by the furious lesbian groups who believe there journalists were responsible for the arrest of their other colleagues who were apprehended.

Over twenty lesbians were arrested following a wedding held at Obomeng in the eastern region of Ghana last weekend for not only publicly engaging in something the constitution of Ghana frowns upon but also flouting the COVID 19 protocols.

WATCH VIDEO BELOW: Video: Lesbians kidnap and beat up journalists after reporting their wedding.

Join The Hottest Leaks Channel On Telegram
Video: Lesbians kidnap and beat up journalists after reporting their wedding
0 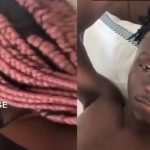 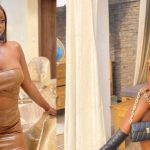