Video : American Comedian Michael Blackson Spotted Selling Groundnut In Accra. American comedian, Michael Blackson, has put to test his street hawking skills, as he tried to sell groundnuts in vehicular traffic.
The comedian who is currently in the country for some holidays, since his arrival has been enjoying every corner he enters.

A few days ago, he was seen at the Sarkcess writing camp together with Fuse ODG, whom he is lodging with and enjoyed the studio session of Sarkodie and Zlatan.

He was also seen at Oasis night club yesterday, partying and having fun with AY Poyoo and a few underdogs making good use of every minute spent here.

His latest activity caught on camera, is he trying to sell groundnuts like a street hawker. In the video sighted online, the comedian was seen buying a whole pan of groundnut from a street hawker and carrying it to begin to sell in the vehicular traffic.

He did get a few buyers, in the few minutes video that was shared online, and quite enjoyed the whole experience. Another thing that was appreciated by viewers was how much the comedian bought the pan of groundnut, as he brought out huge denomination notes to make the purchase.

Other Posts :Gospel musician Yaw Sarpong involved in an accident 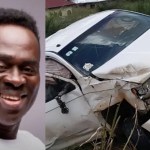 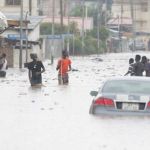 Videos : Kasoa Swallowed Up By Floods After Heavy Rains