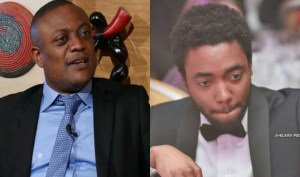 Rawlings Gave Birth To The Most Useless Son On Earth – Maurice Ampaw. “Rawlings’ Son, Kimathi is the Most USELESS Person I’ve Ever Come Across” – Lawyer Maurice Ampaw

Ghana’s most cantankerous solicitor, Maurice Ampaw has decided to put sense into the dumbhead of Kimathi Rawlings who happens to be the only surviving son of the late Jerry John Rawlings.
In the best Knowledge of the highly opinionated legal practitioner, Kimathi is the only son of the late president, but he has done nothing to live up to the name of his dead father adding that he is useless

In the studios of Wontumi Fm, Lawyer Maurice Ampaw postulated that the former president has set everything down for Kimathi to take up when he is no more but his son has not taken opportunities of any of those things.

He said “He is the only son of Rawlings and see him. He is doing nothing. Instead of him to rise he is just there. Even his sister Zanetor is into politics so why is he not.”

Historically, Jerry John Rawlings passed on at the Korle-Bu Teaching hospital in Accra after he was admitted at the hospital a week earlier. Rawlings Gave Birth To The Most Useless Son On Earth – Maurice Ampaw.