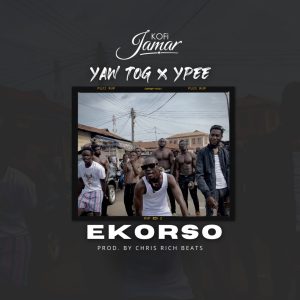 Kofi Jamar – Ekorso ft. Yaw TOG & Ypee. Kofi Jamar has been all over the news , especially entertainment segments for a good reason. In a video trending on social media , Ice Prince was seen and heard eulogizing Kofi Jamar on National Television. The Nigerian music superstar was also spotted on set with him , shooting a music video for their collaborative project. Then on another set again, Ice Prince was seen shooting a music video with Africa’s most decorated rapper – Sarkodie, where he introduced Kofi Jamar to him as a talented young chap.