Furthermore, the Ghanaian socialite and self-styled millionaire alleged that Jackie Appiah spreads her legs widely for fraud boys to enter hence she has no moral right to advise the youth.

We don’t know what the award-winning actress did to warrant such a vile attack from Ibrah but knowing very well how he has developed a penchant for making unfounded allegations and attacking people without any provocation, this won’t surprise Ghanaians.

See what he said in the post below; Ibrah One Exposes Jackie Appiah for sleeping with fraud boys. 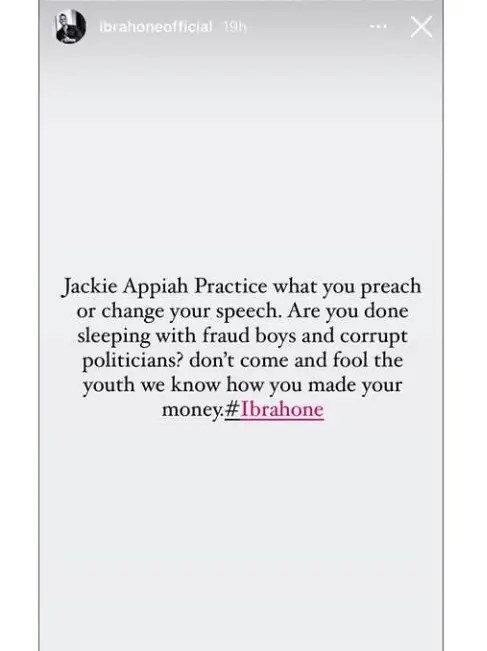 Recently, Jackie Appiah was involved in a brief drama with some female fans in Dubai who recognized her while seated at a restaurant.

The bubbly fans who turned out to be waitresses at the eatery joint she visited easily recognized her despite wearing a black face mask. One of the ladies got closer to her and said she knows her from Nigerian movies but has forgotten her name.

Soon, the other ladies smartly dressed in their uniforms swarmed around the award-winning Ghanaian actress and began to probe further. Jackie insisted she was not an actress and only look like the one they were referring to.

They politely asked her to take off her mask and that was when they got convinced that she is a superstar from West Africa (they never knew she’s from Ghana).

Watch the moment below; Ibrah One Exposes Jackie Appiah for sleeping with fraud boys.