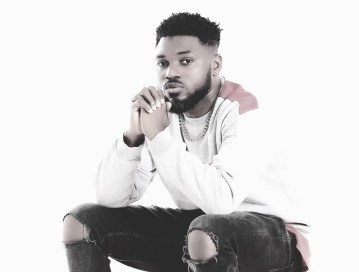 Tema based rapper and founder of DC Empire, Donzy Chaka has disclosed that he doesn’t read the Bible anymore due to some personal reasons.

A lot of celebrities has come recently to express how they find it difficult to attend church because of their celebrity status. Despite not being able to attend church, most of them revealed that they read the Bible and worship God on their own.

Donzy on the other hand does not attend the church neither does he read the Bible.

Speaking in an interview with Doctar Cann on “Showbiz Xtra”, the popular rapper stressed that he doesn’t understand why God would select some people that he only speaks to.

His point was that he has heard a lot of doom prophecies about himself and he doesn’t understand why God would reveal his prophecy to someone else and not to him directly.

“I don’t believe in prophecies. This is because I don’t understand what I have done that God will reveal to someone and not directly to me. We are all God’s children. How then does he select some people to talk to and not talk to the rest of us?. What have we done?” – Donzy explained.

When quizzed by Doctar Cann as to whether he reads the Bible, he said: “I used to read the Bible. But I have stopped for personal reasons”.