Watch: Hot Atopa video of Tiwa Savage officially released. Tiwa Savage’s blackmailers finally release her bedroom video with her boyfriend. Remember days ago, Nigerian musician Tiwa Savage explained that she is currently being blackmailed over a lovemaking video she did with her current partner.

In an interview, Tiwa revealed that she received the video from the blackmailer who asked for money. According to Tiwa Savage, she is really devastated about the incident but has no plans of paying any money to the blackmailer. The musician also noted that the video was accidentally posted on Snapchat by her partner who deleted it immediately.

Well, Tiwa Savage’s blackmailers have released her bedroom video online and it’s already causing ‘confusion’ with some netizens expressing shock over the video.

In the video, the ‘Eminado’ hitmaker unclothed sat on a chair with her backside facing her man who gave it to her from behind in a vigorous manner amid moaning. Watch the video below; Watch: Hot Atopa video of Tiwa Savage officially released.

But that guy did a great job pic.twitter.com/Yrdy5nEUcK 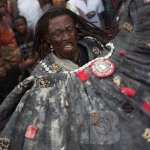 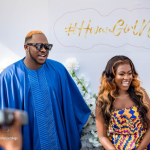