Tepa: SHS student stabs a buyer to death over a polyethene bag. A 20-year-old student of the Tepa senior high school at Asaman in the Asutifi North District of Ahafo Region is in police custody after allegedly killing a buyer who bought sachet water.

The District Police Commander, DSP Paul Ankan confirming the incident said the unfortunate development occurred when the deceased, 23-year-old Seidu, went to a nearby shop to buy sachet water.

The deceased than indicated that then if any of the water falls down he will return the water for it be replaced.

As the exchanges between the deceased and the shopkeeper were happening, Ebenezer who happens to be a friend to the shop keeper was present and got involved in the matter.

It was reported that the deceased even left murmuring while going home but Ebenezer who we don’t know whether he was under the influence of a drug or had been cast a spell followed Seidu to his house to stab him.

After realizing the most stupid thing he has ever done, he began to sense danger by trying to run away but residents apprehended him and handed him to the Kenyasi Police.

Doctors have confirmed the victim died as a result of a deep cut at his back. Tepa SHS student stabs a buyer to death over a polyethene bag. 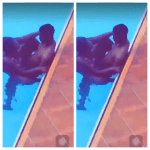 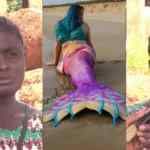