Patapaa promised to get married to Liha Miller some few days ago on January 2, 2021 and has fulfilled the promise.

Photos from the traditional marriage ceremony give credence to the promise made by Patapaa and also cements the controversial relationship the two lovebirds have been enjoying for some time now.

In the presence of family members, Patapaa is seen dressed in a long white caftan with his bride Liha Miller clad in traditional kente colours as they seal their marriage as Ghanaian customs demand. 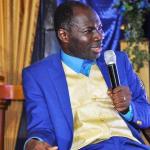 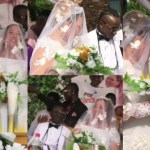