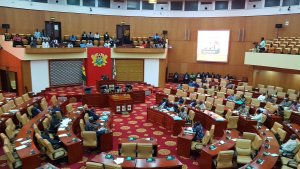 Don’t Vote For My Husband Because He Spends Your Money On Slayqueens – Mp’s Wife Cries. The wife of a Ghanaian Member of Parliament has exposed her husband in a post she sent to a popular Facebook counsellor and relationship advisor called David Bondze-Mbir.

The woman whose name was shielded disclosed that her husband (name withheld) has been spending on other women (side chics) and can confidently say the money he keeps spending on women, not a small fraction has been used on developmental projects in his constituency.

She claims she has been diplomatic about the situation because of her children but now all she wants is a divorce.

“I find it difficult to understand how he can go to the electorates to convince them to vote for him again. The amount of money from his other account that he has been giving to two women I know he is sleeping with is more than any project he’s ever done in his constituency.

I have had him followed for some time and have gathered a lot of evidence to stand on to divorce him. But like every other woman in my shoes, I am being tactical because of our children,” the distraught woman charged.

She further revealed her husband often uses the name of God in vain especially on his campaign trails but falls short of a godly man.

See full message below: Don’t Vote For My Husband Because He Spends Your Money On Slayqueens – Mp’s Wife Cries. 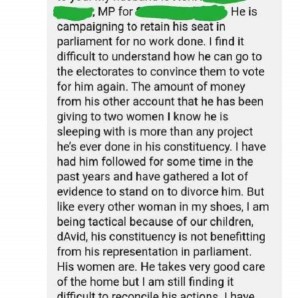 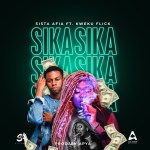