The Asantehene Otumfuo Osei Tutu has appealed to the government and the National Democratic Congress (NDC), to work together and give late former president Jerry John Rawlings a befitting burial.

Otumfuo has cautioned that all individuals and groups who will be playing roles in the burial of Rawlings must collaborate to give him a befitting farewell.

Speaking when the family of Rawlings, led by Victor Gbeho, Dr. Zanetor Rawlings and Kimathi Rawlings, called on him at the Manhyia Palace to inform him of Rawlings’s death, Otumfuo eulogized the late president and called for unity.

“There shouldn’t be any confusion in his absence, we should all unite and give him a peaceful and befitting burial and funeral rites that he truly deserves after his significant services for the state,” Otumfuo is quoted by the DailyGuide newspaper.

Otumfuo also praised Rawlings for embracing democracy when he decided to hand over power to the Kufuor administration in 2000.

“I remember after the 2000 elections when he (Rawlings) was supposed to exit the political office. He told me to arrange a meeting between him and Kufuor so that we could all arrange for a peaceful transition of power.

“This was a former military man, who has transformed over the years to love and appreciate the democratic system of government. This laudable action that he took helped to ensure peace and unity in the country at the time.”

The NDC, the party founded by Rawlings has accused the NPP government of hijacking the burial and funeral activities of Rawlings.

Asiedu Nketia, the General Secretary of the NDC lamented at a vigil held in honor of Rawlings, that the party has been left in the dark over plans for Rawlings’s funeral.

“The President has refused to recognize that the man belongs to NDC, and he is the founder of NDC. Everything about this funeral so far depicts an attempt by an opponent to hijack the funeral of the founding father of our political party, and we don’t think the funeral of our party founder ought to be organized somewhere, and we get invited,” Asiedu Nketia added.

Being close to Rawlings helps to appreciate his goodness, kindness – Jospong
Volume 90%
0 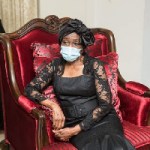