According to Philip Kwabena Agyemang Appiah-Kubi, Daddy Lumba is currently putting some finishing touches to his latest album which seeks to re-establish his dominance in the music industry.

Speaking in an interview with Daily Guide, the manager said: “When you listen to the songs in the album, you will feel the richness of his instrument and you get the feeling as though you were listening to him perform live on stage.”

He adds that venue and date for the launch will be announced soon.

Daddy Lumba is an award-winning artiste who has released over 33 albums which include ‘Aben wo ha’, ‘Awusuo’, ‘Obi Ate Me Su Buo’, ‘Sika Asem’, ‘Yen Tie Obiaa’ among others. Daddy Lumba Set To Release New Album.

Other Posts : Video : Stonebwoy And Davido Donates Heavy Slaps To A Fan 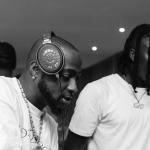