Amerado recounts how Drogba of YOLO fame snatched his girlfriend. Drogba of YOLO fame has played out his role in the hit series in real life at the mercy of Amerado’s heart. The Ghanaian rapper has disclosed that the actor has once snatched his girlfriend. According to the ‘Yeete Nsem’ rapper, he was left heartbroken by the actor’s move because he was so much into the girl with hopes of taking it far.

“It was about three or four years ago, the girl is from Accra, It wasn’t easy, I couldn’t drink water for one month. It’s a bad experience, excuse me, even when you lose a loved one to death, it’s that painful,” he said.

Amerado was speaking on Onua TV on Captain Smart’s show where he detailed that he lost the girl to John Peasah, the actor who shot to fame for his womanizing role and truancy character in the popular YOLO TV series.

Asked what exactly happened, Amerado told Captain Smart that “what is most painful is this world is when you show someone love and the next moment they change and when you asked why they changed they don’t give you any reason”.

According to the rapper, he just started his career fresh and the lady accepted to be his girlfriend and “she went to meet an actor in Ghana, who was staring in YOLO, he was called Bra Charles in YOLO,” so she decided to be with him.

“I don’t know what I did” Amerado added and disclosed that the girl later told him “to live life like she never existed”. Hear more from him in the video below. Amerado recounts how Drogba of YOLO fame snatched his girlfriend.

Amerado recounts how Drogba of YOLO fame snatched his girlfriend
0 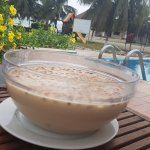