Jamaican artiste Kranium reveals his desperation to work with Sarkodie. Jamaican artiste Kranium has revealed his desire to share the same stage with Ghanaian rapper and two-time BET award winner, Sarkodie. Kranium in a convo with Ghanaian rap icon Sarkodie said he would love to share the same stage with him when he touches down in the motherland which he plans on doing soon.

The Jamaican superstar in a tweet revealed that he needs Sarkodie on his journey when he comes to Ghana for a project or concert which Sarkodie replied in the affirmative.

He wrote, ‘@sarkodie imma follow you on this fit journey 💪 I’m be looking outta shape on these stages out here lol Nicely.”

Sarkodie warmly replied, “A must my brother 💪🏿 we go hard when you touch down 🇬🇭🔥”

Kranium, born Kemar Donaldson is a Jamaican reggae and dancehall singer known for his 2013 hit single Nobody Has To Know which gave him international recognition and led him to the Atlantic Records record label. See their convo below; Jamaican artiste Kranium reveals his desperation to work with Sarkodie. 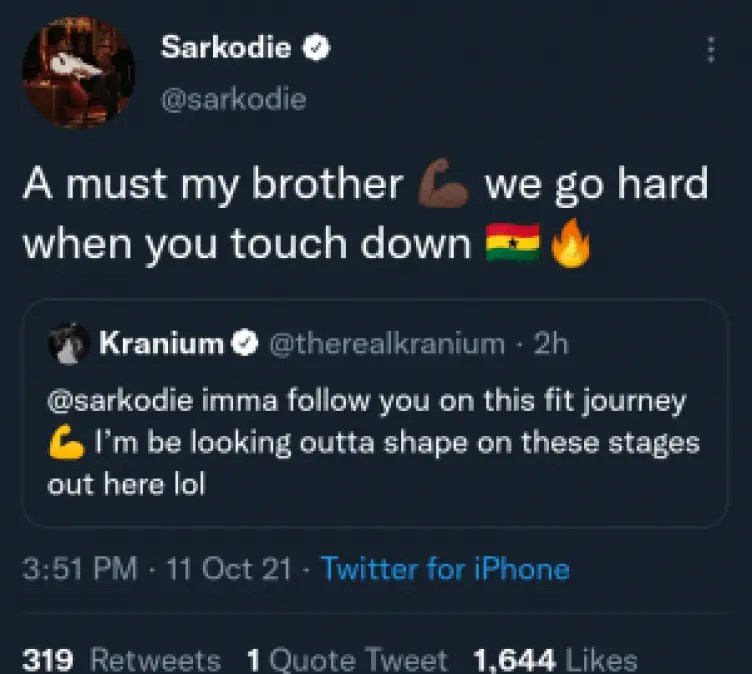