As bad as the year 2020 treated us, we should be grateful that at least a gem was discovered from the oil city of Ghana Takoradi. The Takoradi born rapper who’s real name is Raymond Alour and a product of Zebilla secondary technical school seems to be having a good time for himself on the showbiz front.

His music career probably started the very first day he was born and he’s done well to build his craft to where he currently stands. It was Ghanaian musician and billionaire Criss Waddle who first discovered him. After watching a series of his freestyles, the Amg business CEO made the best choice to sign him on his record label because he was a gem worth he push.

Like the saying goes, success comes to those who wait. Evergreen embraced the big opportunity and made a promise to his guru on a song titled waddle to make his trust in him pay off. Before dropping the song Waddle, he had already dropped song titled Amg Business to announce his arrival at the one of the biggest record labels in Africa.

Even though things went pretty slow after his arrival, he stressed that he not going to rush. Giving out quality music was his main goal at Amg. After months of silence, Evergreen announced that he got a project on the way. During that time he played well not to disclose a lot about the incoming.

On February 28th 2020, the EP was officially released and distributed Distrokid and African Hip Hop 360. The reception of the EP was outstanding especially from his home city takoradi. Track Number 5 which was “Dear God” notably stood among the rest and even went further to Top several Charts for two Solid months. Tracks like my Taadi, 3 Square Meals were very outstanding and claim top 5 spots on several music charts.

Dear God was the most requested song on airwaves for a long period and even got several big names stunned at the brilliance of the Taadi boy. Criss waddle after bumping the Ep several times gave Dear God a must listen tag. Social media users rolled out a series of possible feedback for the EP.

In attempt to keep the wave and buzz going, Amg Evergreen was planning on releasing an Azonto themed song to keep the entire nation dancing when Legendary Rapper Sarkodie announced that he will be giving out free verses to a host of musicians in a bid to reignite Ghana’s favorite music genre Azonto and urged the general public to submit their Azonto songs via email.

Out of the thousand and above songs submitted, the one which caught his attention the most was that of Evergreen. The king came live on his various social media handles to play some of the songs submitted. Days passed and Sarkodie announced that he was done putting a verse on one of the songs submitted. He posted a snippet of his verse and urged the owner of that song to release the song in the shortest possible time available.

The anticipation was huge as it was going to be the first song off Sarkodie’s promise. The entire sark nation fanbase was thirsty so was the multitude of music lovers. After Sarkodie, Ditto Music and Amg gave the go ahead, Yaaba was officially released and honesty will push anyone who put the song on repeat to confess it was far above expectations. The song was a total slap and within a few hours after it’s release it was all over the country. It took over social media trends as music lovers jammed passionately to it.

This was a song with overall Explicit content and and song you can’t digest without getting on your feet to dance. Even though sarkodie was on the song, he enjoyed listening to it more than having a verse on it. Sarkodie took his time to listen to projects of Evergreen including his Green Tape EP and a recently released short film titled Dailogue which featured Evergreen and a series of takoradi rappers.

One cannot deny facts. Sarkodie took to social media to announce that Evergreen was the next big thing and was destined for Greatness. He later went ahead to crown Evergreen the young king and pronounced him as his next of kin.

Criss waddle who was stuck repeating the Yaaba song over and over again thanked Sarkodie for putting his boy on the wave and stressed that he’s got so much planned for Evergreen and thus the world should watch out.

Other notables A list celebrities to rate Yaaba as a five star must listen songs are Label mate Medikal, Show boy, Kwadjo Sheldon and a series of top celebrities. 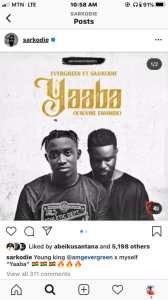 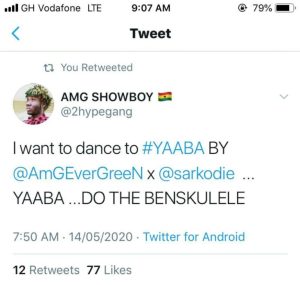 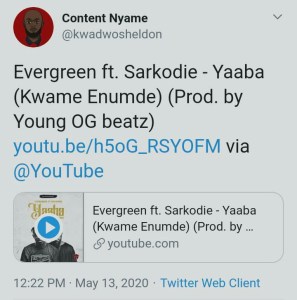 Though the song have become a street anthem and a massive hit, Evergreen still believes it’s no close to been his biggest song since he’s got a whole lot more to offer and is eager to work with several artiste in the nation and international.

A couple snippets spotted on his Instagram story suggests that he’s got a song with Medikal and Criss Waddle warming up. There’s probably more to follow as from the look of things he’s got a lot to work on. Evergreen stressed that getting as far as he can is his main goal and to him no far is enough.

Just in case you should know the Taadi born rapper is much of a self motivated individual who learns a lot from his seniors. He classifies his only competition as himself and stressed that laziness is some he will rather not entertain on himself. He once explained in a radio interview that anytime he feels lazy, he Googles for the price of his dream car and jumps back on his feet. This is his story and it’s only starting. 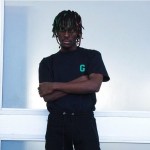 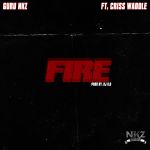