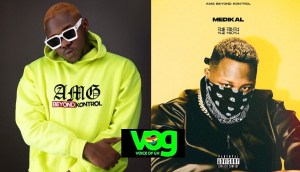 Happy to announce my 5th studio Album #THE TRUTH will be out next month ? pic.twitter.com/RUyEPSviiV

This dancehall song is his 3rd single of the month and it’s production credit goes to Shawerz.

Dead Peepol and Rich Kent has finally released the much anticipated remix for their popular “Otan Hunu” song.

Watch the official video for the original “Otan Hunu” song below;

P.I.C which stands for Partner In Crime is the dancehall artist’s 2nd single of the month, it cones after he dropped “Fuck Sars” a few days ago.

P.I.C was produced by Beatz Vampire. Listen and download below;

The potential hit song was produced by The One Beatz and mixed by Skito Beatz. Listen and download below;

Shatta Wale rallies behind the Nigerian youths in their protest to end the “Special Anti-Robbery Squad (Sars)” who has been harassing the innocents.

#EndSars has been trending on social media for almost a week and Shatta Wale has joined the campaign by releasing this masterpiece.

The song was produced by Phredxter and mastered by Mix Master Garzy. It also comes with it’s official video which was directed by Phamous Films.

After months of promotions, the highly anticipated album has finally been released by Lynx Entertainment Records for public consumption.

The album contains 14 songs, with which 7 featured both Ghanaian and international music stars.

Three of the 14 songs, Ghana We Dey, Wa Ye Wie and Open Gate were released months prior to the full album. It were the only singles released.

The album also boast production credit from the finest music producers in the country, including Richie Mensah, MOG Beatz, Willis Beatz and more.

Son Of Africa is the singer’s 2nd studio album. His debut album titled “Rockstar” was released in 2018.

After a successful debut album, Kuami Eugene has released his 2nd album and it’s set to take over our airwaves.

Stream the highly anticipated album on apple music below;

Kuami Eugene features Sarkodie and DJ Mensah on this song which appears on his “Son Of Africa” album titled Beifour.

Beifour is the 9th track on the 14-track album and it’s production credit goes to Hylander and Lynx Entertainment’s boss, Richie Mensah.

Stream the full “Son Of Africa” album below;