An MP’s take-home pay is GH¢11,000 – Sam George. Sam George says the gross monthly salary of an MP is GH¢29,000 while the net is GH¢11,000. The legislator also discloses that MPs suffer a GH¢6,000 deduction from their salaries for the V8s they use. He emphasizes that MPs pay for utilities contrary to public perception that they do not. Members of Parliament take home an amount of GH¢11,000, the NDC MP for Ningo-Prampram has said.

According to him, the GH¢11,000 is the salary MPs in the eighth parliament will be receiving until the salaries and emolument committee has been set up by the president to determine the salaries of Article 71 officeholders.

“The salary of an MP in the last Parliament is around GH¢29,000 a month and that is gross. By the time they finish the deductions, you’ll go home with GH¢11,000,” he explained.

“People have been saying MPs get free vehicles, free fuel, free water; there is no free thing. The MPs pay for the vehicle, maintenance, water, electricity and everything that comes with it because the car is a loan and it needs to be paid for. After those deductions are done, GH¢1,500 is paid to the party for it to be used to run the day-to-day affairs of the party, then the party in the region needs to get some of the money. Now we’ve decided that MPs who leave Parliament have no pension, so we contribute GH¢1,500 towards the pension scheme we want to start, after all these, you have to go home to your family with GH¢11,000,” he explained.

Sam George indicated that MPs do not take ex gratia but rather it is a balance of the money owed by the state that is paid to them yet electorates insult them for that.

He blames the Public Affairs Directorate of Parliament House, led by Kate Addo, for failing to educate the masses on the issues of MPs and their ex gratia.

“The fact that people think there is ex gratia for MPs is the failure on the Public Affairs Directorate of Parliament because there is no ex gratia,”

He explained that four years after he went to Parliament as the representative of Ningo-Prampram, he didn’t know his salary until the dissolution of the seventh parliament.

“In 2017, I swore the oath of office on January 7 and went to Parliament. I did not know what my salary was until January 5, 2021, almost four years into my term before I knew what my salary was. This is because the constitution gives the President the mandate to set up an emolument committee to determine Article 71 holder salaries.

Sam George noted that, after the committee’s work, they had to send a recommendation to the president indicating the salary of all Article 71 officeholders, it is then that the difference in salary would be paid. An MP’s take-home pay is GH¢11,000 – Sam George. 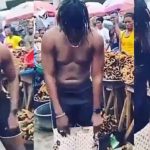 Lady stripes boyfriend n@ked at the market for cheating